The first scientific Arabic grammar written by a European scholar

I: Third, most encompassing edition of the first scientific Arabic grammar written by a European scholar. Erpenius had published his "Grammatica Arabica" in 1613, having completed it four years earlier while staying in Paris with Casaubon. A second edition appeared in 1636 - edited by Anton Deusing, a pupil of Golius - adding the fables of Lokman and Arabic proverbs earlier edited by Erpenius. The present edition was edited by Golius himself, Erpenius's successor to the chair of Arabic. Repeating Deusing's 1636 edition, it now adds a modest Arabic chresthomathy previously edited by Golius's pupil Fabricius. This copy includes the cancel-slip for two lines of text and a catchword on f. *2v. Interleaved between pp. 200 and 201 with five ms. pages by a Swedish scholar (c. 1915).

III: Only edition of this rare collection of Arabic proverbs with their Latin translations, also prepared by the German scholar Sennert (1606-89), himself a pupil of Golius and in 1640 Jakob Weller's successor as professor of oriental languages in Wittenberg.

Somewhat browned due to paper, but well-preserved altogether. Several old ownerships on flyleaf, including a note of acquisition dated Wittenberg, 1619, and the ownership of Ernst Friedrich Tobias (dated Feb. 1725). 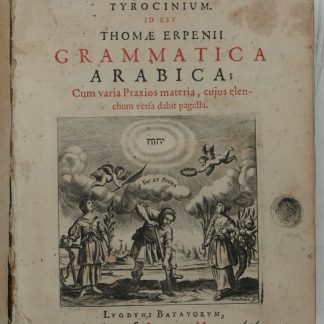