To "my dear Smith": "It is most pleasing to see here the S[lave] T[rade] is driven back [...] In fact Kilwa now seems the saintly place [...] If this scarcity of food and failure of crops extends far inland we shall have the population begging to be sold. Mafia [Island] may take in slaves but it is so near the mainland that no person on earth could prevent it while the institute exists - but is their demand enough on Mafia for any great number of slaves? Boette and coconuts are its chief exports. When you go there visit Kisiwani [...] where corals are washed out of the bank in thousands [...] The Kilwa ruling family fled at one time it is mentioned in the old Kilwa chronicle. Did these old Kilwa kings [grow?] nothing but coffee & do the Bavarians buy up the silver and gold? Native traders are no fools and if gold & silver is ever found I would gladly pay a little over the value of the metal to settle a few permits [...] If you see your way I think a trip south should may be time well spent. I daren't visit the Kilwa people (Indians) [...] I feel sure the end of the land S[lave] T[rade] is further south and the local demand must be very great. I have little faith in estimates made on short experience, so often a man takes the one month or two when slaves are brought down and multiplies it by twelves for the year's estimate. One thing is to find out the caravan men [...]".

Written during the Berlin Conference of 1884/1885 which regulated European colonisation and trade in Africa during the New Imperialism period, and coincided with Germany's sudden emergence as an imperial power, Kirk discusses trade of slaves, as well as gold and silver, the latter mainly in reference to Germans. He suggests that slave trade activity is diminishing near Kilwa due to British abolition efforts, though not as much further south. He then presents theories on estimating the numbers of slaves captured. Also interesting and infrequently documented, he presents concern respecting slavery on Mafia Island. [In the mid-1820s, the town of Kua on Juani Island, the southernmost of the Mafia archipelago, was attacked by Sakalava cannibals arriving from Madagascar with 80 canoes, who ate many of the locals and took the rest into slavery. Under a treaty of 1890, Germany took control of Mafia and constructed the buildings still evident on Chole Island.] - The recipient of the letter, identified as 'Smith', may be Sir Charles Euan-Smith, a Colonel in the British Army who in 1887 he would be appointed Her Majesty's Agent and Consul-General for the Dominions of the Sultan of Zanzibar. [In February 1890 the Sultan died and Euan-Smith took advantage of the situation to persuade the new Sultan, Ali bin Said, that Zanzibar should be a British protectorate. This resulted in the so-called Heligoland-Zanzibar Treaty of July 1890 in which Germany and the United Kingdom agreed on territorial interests in East Africa.].

By 1868 Omani traders of Zanzibar had long since driven the Portuguese out and Kilwa had been a leading Arab center of the East African slave trade for more than a century. Thriving European plantation economies as close as Mauritius and as far away as Brazil perpetuated the nefarious trade. Kilwa was eventually absorbed into the Sultanate of Zanzibar (1841-1884) which controlled the lion's share of the East African trade. Zanzibar attracted the attention of European imperial and anti-slavery interests which forced the Sultan to close its then-famous slave market in 1873. To this end, the Sultan Bargash signed an edict making slavery illegal and imprisoned the Governor of Kilwa. Even so, the trade for a time remained brisk and a slave was allegedly sold there as late as 1935. Kilwa was part of the colony of German East Africa from 1886 to 1918.

Sir John Kirk (1832-1922) was a Scottish physician, naturalist, explorer, and British administrator in Zanzibar. He accompanied David Livingstone on his second Zambesi expedition from 1858 to 1863. In 1873 Kirk was made the first British Agent and Consul General of Zanzibar, where he eventually convinced the Sultan of Zanzibar to ban the highly lucrative slave trade. He held this post until he returned to England in 1887. He was also a keen botanist, highly regarded by Sir William Hooker, Joseph Dalton Hooker and William Thistleton-Dyer. After the death of Livingston, Kirk pledged to continue Livingston's work to end the East African slave trade. For years he negotiated with the ruler of Zanzibar, Sultan Bargash, gaining his confidence and promising to help enrich the East African domain through legitimate commerce. The Sultan officially banned slave trading in 1873, but it would continue. In 1881 Kirk decided to post a vice-consul, Mr. Jack Haggard to Lamu, Kenya. By 1885, the region was larger and more profitable, his endeavours becoming ever more challenging. Unfortunately, after the Berlin Conference, the British Government forced Kirk as British Consul in Zanzibar to drop the Sultan as part of the "Scramble for Africa".

In 1873, British agent John Kirk by threatening to blockade Zanzibar got Sayyid Barghash ibn Sa'id to sign a treaty banning the slave trade by sea and promising to protect all liberated slaves. On 5 March, the Sultan passed a decree prohibiting the export of slaves from main land and closing of slave market at Zanzibar. Zanzibar slave market was to be closed within 24 hours. In 1875 Sayyid Barghash visited Queen Victoria in England, and in 1876 he proclaimed that conveyance of slaves by land was prohibited nor could slave caravans approach the coast from the interior. Riots broke out in Mombasa against the freed-slave work of the missions, and at Kilwa slave-traders hid 6,000 slaves near the coast. In 1876 the Sultan decreed that no slaves were to be transported overland. Kirk persuaded Barghash to raise an army, and in 1877 Lt. William Lloyd Mathews was appointed to drill the recruits. Slave-trading continued until the Sultan put the Governor of Kilwa in prison. Kirk estimated that during the 1870s about 10,000 slaves a year crossed the Juba River into Somaliland. As the slave trade eventually declined, the export of rubber, cloves, and ivory greatly increased. In 1907 slavery was finally abolished entirely in Zanzibar and Pemba. Kirk died in 1922 at the age of 90. 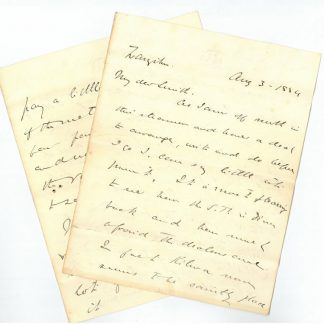