Charming hand-coloured geographical puzzle set, manufactured by Logerot in Paris, rarely encountered complete and with eight maps: World, North America, South America, Europe, Asia, Africa, Oceania, and France. Puzzles of this type were first produced in London by John Spilsbury in the 1760s, but the style passed to the continent and became a popular educational tool in France and Germany in the early to mid 19th century. Logerot issued his puzzles from the 1850s onwards; the European borders of this set point to a production date between 1878 and 1880. The puzzle maps are stored in the box fully assembled, each resting on a paper mat with cloth tabs for easy retrieval. 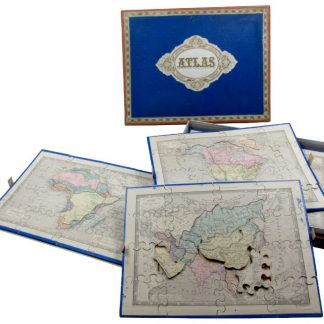