A pocket-size album assembled by an artist studying human as well as animal proportions, basing his work on engravings of anatomy and of classical statues and figures. Apart from his manuscript notes on Darwin’s "The expression of the emotions" and on "The proportions of the human figure", the album comprises 25 anatomical pen, ink and wash drawings (12 large and folding illustrations and 13 highly detailed sketches of body parts) as well as 14 pages of printed text and 48 plates from Pauquet’s "Recueil d’anatomie portative a l’usage des artistes" (Paris, ca. 1850; including press-copied duplicates), many of which are heavily annotated and hand-coloured; 12 steel engravings of classical statues; 8 plates on the anatomy of the horse; with 2 further drawings and 1 engraving loosely inserted.

Rebacked, flap restored, endpapers renewed. Bookplate of the Marquesses of Rockingham (later Barons and Earls of Sondes) to front pastedown; dated ownership inscription of George Arthur Watson to bookplate and verso of front flyleaf. The ancient family of Watson had long been Baronets, Earls, and finally Marquesses of Rockingham, but the honours became extinct with the passing of Charles Watson-Wentworth in 1782. George Arthur Watson's connection could not be traced, though he may be the Edinburgh painter George Watson mentioned with an 1873 date by P. J. M. McEwan (Dictionary of Scottish art and architecture, Woodbridge 1994). 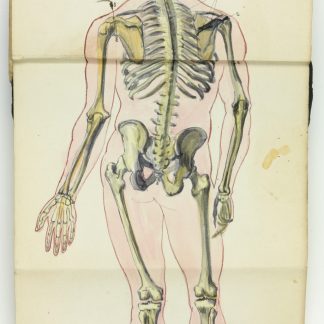