4to. 213 (instead of 215) ff. (lacking ff. 212-213 and final blank). Title printed in red and black. With woodcut title border and two nearly full-page woodcuts in the text. 19th century half calf (restored) with giltstamped spine.

First edition. "The earliest Syrian and Armenian grammar printed" (IA). Extremely rare and early work of oriental studies, also important for the history of music due to the first illustrated description of the bassoon, which the author's uncle, Afranio degli Albonesi, had invented early in the century and had first demonstrated in 1532.

The canon regular Teseo Ambrogio degli Albonesi (often simply referred to as Ambrogio or Ambrosius; 1469-1540) taught the Syriac language. This introduction to the oriental languages - his only publication - is a mixture of lingustic treatise and a collection of exotic alphabets. If Albonesi's results are not in every case correct, they remain of great importance to the history of linguistic scholarship: the "Introductio" constitutes one of those works which inspired the budding discipline of comparative philology to undertake further research. "His work offers a detailed survey of the Syriac and Armenian languages from various points of view, and a short notice about the other exotic languages (Samaritan, Arabic, Coptic, Cyrillic, Ethiopic) - these languages are all discussed with examples written by hand in the earlier chapters, and throughout the work we find blank spaces where such words had still to be filled in" (Smitskamp). Some of the blank spaces mentioned have been filled in in ink by a contemporary hand. Lacks the final two pages of text (including the colophon). Slight worming to upper margin near end. 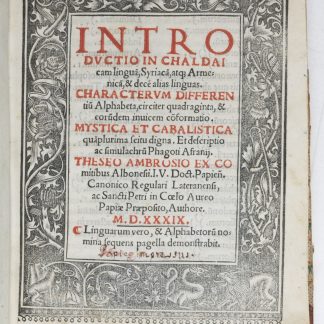