Large folio (260 x 395 mm). (20), 398, (8) pp. With engraved frontispiece, engraved author's portrait, large engraved folding map of the Mediterranean Sea, 103 engraved plates (many double-page and folding, and often containing more than one illustration) and 18 engravings in text (totally containing 218 illustrations, numbered A & 1-210). The engraved plates are all after drawings by De Bruyn and contain 15 plates engraved by Jan Luyken and 1 by Casper Luyken, all but one unsigned. 18th-century, gold-tooled, tanned goatskin, marbled edges; rebacked, with original backstrip laid down and modern endpapers.

Large paper copy of the first edition of the beautifully illustrated account of De Bruyn's first journey, visiting Egypt, Syria, The Holy Land, Rhodes, Cyprus, Scio and Turkey. The Dutch traveller and painter Cornelis De Bruyn (1652-1726/28) left The Netherlands in 1674 to travel through the Levant by way of Italy. He stayed in the Levant for seven years before settling in Italy in 1685 and returning to the Netherlands in 1693. The work is especially valued because of its engravings after the drawings made by De Bruyn and executed by well-known artists as Jan and Caper Luyken and others, which include, amongst many others, folding panorama's of Alexandria, Sattalia, Constantinople, Bethlehem, Jerusalem, Rhodes and Chios. The publication was soon followed by editions in English and French.

The present copy is printed on large paper from a single stock, watermarked: fleur-de-lys on a crowned shield above 4 and WR = WK, with a trimmed leaf size measuring 396 x 259 mm. (not in Heawood or Laurentius).

With some occasional spots, some folds and edges of the plates reinforced or mounted on new stubs; a very good copy. The binding rebacked as noted and with some wear to the tooling. 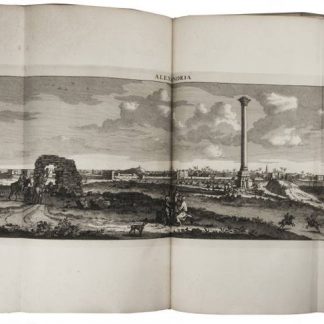