Napoleon's Ambitions in the East

A two-sheet wall map showing Prussia, Turkey, Egypt and Abyssinia in the west, and the Aral Sea in Kazakhstan, Persia, Arabia and Somalia in the east. Two inset maps show the routes from Siré to Gondar and from Gondar to the sources of the Nile. According to the inscription, the map is based on that of "the late J. B. Laborde" (Jean-Benjamin de Laborde [1734-94], a traveller and musician), with amendments; however we have been unable to trace a map of the region by him.

The vast map was published to satisfy French interest when their seemingly-unstoppable General Bonaparte turned his attention to the conquest of Egypt in 1798. Napoleon had captured Malta en route to Egypt, and the oval title vignette shows him overseeing the burial of the French dead under Pompey's Pillar after the capture of the important port city of Alexandria (July 1798).

After the defeat of the Mameluk army at the Battle of the Pyramids it was Napoleon's intention to subdue the rest of the Ottoman Empire before moving to threaten British interests in India. However, as the political situation in Paris was deteriorating, Napoleon decided to leave his army in Egypt in 1799, returning to France to become First Consul. His army was less fortunate, surrendering to the British at Alexandria in 1801.

This map is very scarce: the French citizens' interest in maps of the Orient evaporated as quickly as Napoleon's. 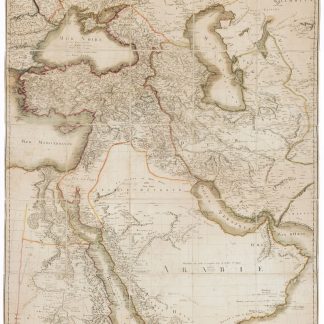