The "General Guide to the Kingdom of Saudi Arabia": a rare public directory to the Kingdom of Saudi Arabia, published on behalf of the Saudi Arabian Ministry of Commerce in what was for the monarchy an eventful year: King Saud established the first university in Saudi Arabia and the country became a member at the International Monetary Fund; also, the government was strongly occupied with international affairs in the Middle Eastern crisis, the larger Arab world, and developments of the Cold War. The volume documents the remarkable degree of development which the Kingdom had achieved since its foundation 25 years previously. 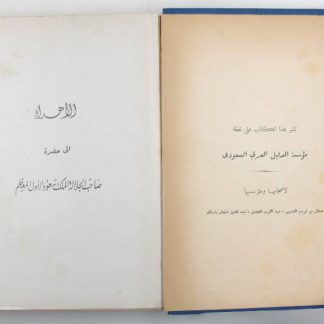