First edition. Very rare anatomical dissertation on the female breast, written by the German physician and botanist A. B. Kölpin (1739-1801). Formerly a theologian, Kölpin had to forsake a career as a preacher due to a thoracic illness, whereupon he took up medicine. From 1765 onwards he served as director of the Greifswald Botanical Gardens before moving to Stettin as professor and county physician. A Freemason, Kölpin corresponded with Carl von Linné and published a German translation of Pehr Löfling's botanical travelogue.

Kölpin discusses the overall structure of breasts, the areola, and the exterior and interior parts of the nipple, noting its faculty for "erection in sexual arousal and other states of irritation" (p. 8). He gives an account of the blood vessels, nerves and muscular tissue throughout the breasts. Also, he describes an experiment by which he drives coloured liquids through various lactiferous ducts, proving by the several colour mixtures that they all branch out from a single papilla.

Very slight browning. Wants the plates and their explanation found in some copies. 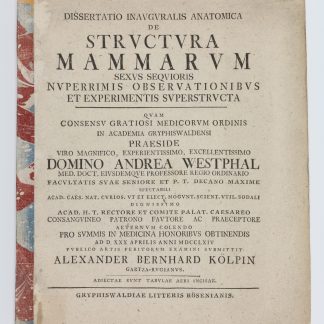