[Photo Album]. Plaque for British Soldiers on Mount Camino paid for by Moroccan Goums [Soldiers] in 1945.

Seven photos and a mimeo letter mounted on four pages of a tied homemade album with paper covers. Photos approximately 160 x 110 mm. Inked caption beneath each photo. The rest of the album pages are blank. Oblong folio.

A mimeo letter from Headquarters, 169 (Lon) Inf Bde states that members of their brigade scaled Mount Camino and routed the Germans from an old Benedictine monastery located on the summit in November 1943. When the Moroccan Goums arrived in the area in the Spring of 1944 they were so impressed with the mountain warfare of the British troops that they subscribed for a plaque to be placed on top of the mountain honouring the British soldiers. These seven professional quality photos which the mimeo letters says are "enclosed" were taken at the dedication of the plaque. The photos show Moroccan troops, the 8th Army commander, and the plaque. 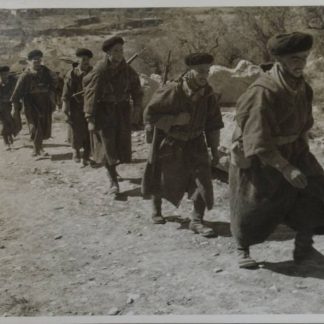