4to. (3), 78 pp. With an engraved plate bound as a frontispiece. Contemporary marbled boards.

Second edition of Leibniz's groundbreaking work on combinatorics. It was first published in 1666 as "Dissertatio de arte combinatoria", expanded from the author's thesis "Disputatio arithmetica de complexionibus", with which he earned the venia legendi. This unauthorized re-release, produced 24 years later, caused Leibniz to respond with corrections in the Acta Eruditorum of 1691. Both editions are extremely rare; NUC lists no more than two copies of the present one.

This is Leibniz's earliest work in combinatorics, the branch of mathematics concerned with the study of finite or countable discrete structures. It thus constitutes an early and important contribution to the scientific foundations of modern computer engineering. "In this treatise, Leibniz undertook that part of his grand plan that aimed at achieving a complete set of possible connections of terms, and the mathematical conception of this problem he named 'ars combinatoria' - a name that would stick" (cf. Cantor). This early work of Leibniz is all the more remarkable for the "very modest specialized knowledge that he then possessed [and which] is reflected in the 'Dissertatio de arte combinatoria'" (DSB).

Somewhat browned throughout as common due to paper. Trimmed rather closely, with some professional remarginings at the top edge near the end of the book and repairs to the gutter of the title page (loss of a few letters at the very left, some unobtrusively supplied). A single copy in auction records (1998: Reiss 65, lot 583: 65,000 DM). Apart from the frontispiece, VD 17 cites 33 numbered plates - in apparent error, for no known copy contains more than this single plate. 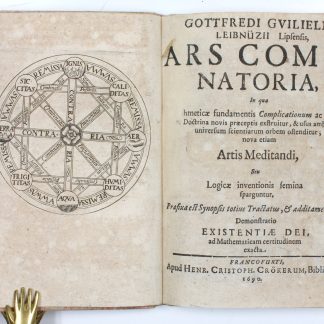