List of expenses for extensive fortification works executed in June, 1800 on Roda island ("isle de Raouda") located on the Nile in Cairo. The total costs, including the wages of a water carrier and a cameleer, amouted to 72,848 francs that were comfortably within the budget of 84,000 francs.

After the assassination on 14 June 1800 of General Jean-Baptiste Kléber, who had been in command of the "Armée d'orient" since Napoleon's departure, the collapse of the French occupation of Egypt was imminent. The Anglo-Ottoman offensive started in March 1801 and reached Cairo by May. On 22 June the French garrison under Augustin Daniel Belliard surrendered and withdrew to Alexandria. The siege of Alexandria from 17 August to 2 September put an end to the Egyptian campaign with the remaining French troops, including Malus, being repatriated to France on British ships according to the terms of the capitulation agreement.

Étienne-Louis Malus was trained to become a military engineer at the École royale du génie de Mézières and the École Polytechnique in Paris. In 1796 he joined the Engineers Corps of the revolutionary army and quickly ascended the ranks. His scientific career started during the Egyptian campaign when he became a member of the newly founded Institut d'Égypte. Malus' mathematical work was almost entirely concerned with the study of light; he is known for Malus's law, giving the resultant intensity, when a polariser is placed in the path of an incident beam. In 1810 Malus was elected into the Académie des Sciences. That same year the Royal Society of London awarded him the Rumford Medal.

Well preserved with small pinholes along left hand edge of the document. 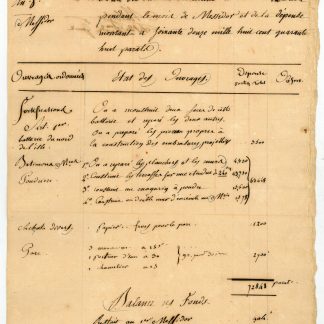