A volume from James Buckingham's important journal which he founded in January 1824 under the significant title, "The Oriental Herald and Colonial Review", though the subtitle was renamed "Journal of General Literature" the following year. Several pieces are of direct relevance to the Arab world and the Gulf region: the transcript of a Debate at the East India House on the Bombay Marine (pp. 146ff.) variously discusses the "pirates in the Persian Gulph", the climate and various mishaps befalling ships there, while a review of the 1826 book "Sketches of Persia" (pp. 77ff.) gives an account of the "burning sandy plain which skirts the gulf". Johann Gottfried Eichhorn's "Historical Sketch of the Trade with India Before the Age of Mohamed" (pp. 437ff.) includes a discussion of Arabian and Gulf-region trade in the third century, and literature is represented in reviews of the Arabian tales "Abassah" (pp. 239ff.) and "Karmath" (pp. 557ff.).

"Except for 'The Asiatic Journal', the official publication of the East India Company, England had no paper devoted to colonial affairs. 'The duty of nations to enlighten and improve the condition of the people they subjugate,' he said in an introductory essay, 'can scarcely be required to be enforced by argument.' From this point of view he proposed to treat colonial problems in terms of colonial interests and at the same time to show the English people that conditions in the colonies were related to their own welfare" (R. E. Turner, James Silk Buckingham, 1786-1855: A Social Biography [1934], p. 226). 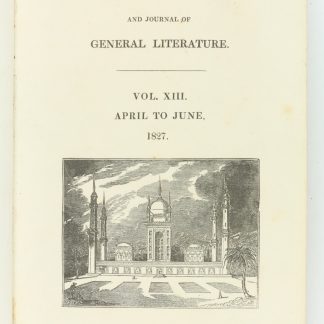