To his publisher, asking for the return of an unpublished chapter about the period of "Sturm und Drang" in Germany (to be incorporated in his forthcoming Reminiscences), with further discussion about England’s difficulties in South Africa and Afghanistan: "[...] At present, the terrible complication in China, which has no doubt been accelerated by the difficulties in which England is still involved in South Africa, threatens to have further dangerous consequences in Afghanistan, whose ruler is treated very unwisely by the Government at Simla. The tension between Simla and Kabul is very great. I hear a great deal about it through the former Chief State Secretary (Sultan Mohammed Khan, a gifted Indian by birth, whom I know intimately), who has been in England for some time, and who is on the point of going to Simla, and from there to Kabul. Would an article on China, Afghanistan, and the general situation - perhaps under the title 'New Storm Clouds' - be welcome? [...]". 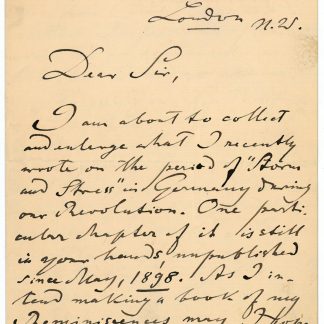