Directory of the tribes of the Transjordan districts - author's presentation copy

Rare history of the Emirate of Transjordan (today the Hashemite Kingdom of Jordan), then a British protectorate. Presentation copy from the author to Ahmed Salem el Sakrun of the Arab Legion and inscribed by him to "my friend Ahmed Effendi Hsein El Amawi as a remembrance, Amman 23.12.35" on inside of upper wrapper.

The second volume contains not only the first volume's index, but also an annotated directory of the tribes of the various districts of Transjordan, comprising extensive tables, genealogies, and introductory essays on each tribe. With a separate index to the tribes and a bibliography at the end of the volume. Major-General F. G. Peake (1886-1970), known to the Jordanians as "Peake Pasha", served under Lawrence of Arabia and formed the "Arab Legion", the territory's regular army, in the early 1920s. He was later appointed Major-General in the army of the Emirate of Transjordan. Upon his retirement in 1939 he was succeeded in his command by John Bagot Glubb.

Mimeographed typescript, printed on one side throughout. No copy in British Library. 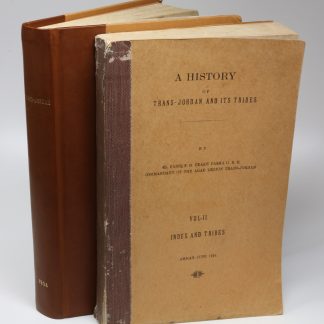