Rare, detailed Syrian-printed map of the short-lived United Arab Republic, which aimed to unite Egypt and Syria politically in 1958. Although it effectively ceased to exist with the Syrian coup of 1961, Egypt continued to use the name until 1971.

The declaration of the United Arab Republic bolstered the trend towards Pan-Arabism, and confrontational attitudes toward neighbouring states increased. The province of Hatay, on the Turkish border, is shown on Syrian territory, reflecting ongoing disputes over claims on Hatay beginning after the end of the First World War. Similarly, Israel is designated "Palestine" in the Palestinian territories.

Some stains; wrinkled with several edge tears and chips. Folded. 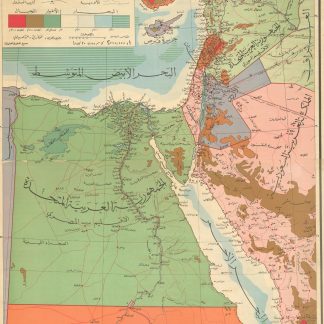