Georgian workers of the world, unite! Unique first Russian-language edition of the Communist Manifesto to be published in Georgia

8vo (20 x 13.5 cm). 36 pp. With a small decoration on the front wrapper. Set in Cyrillic types, with some Cyrillic headings in a sans-serif and others (and the 2-word title on the wrappers) in a face with rounded swellings at the terminals. Stapled with a single staple in the publisher's original red paper wrappers, with the only title-page printed letterpress on the front wrapper.

Only recorded copy of the first Russian edition of Marx's and Engels's Communist Manifesto to be published in Georgia. Marx and Engels published the first edition at London in February 1848, just as the Revolution of 1848 was erupting in France and before it spread to the German states in March, under the title "Manifest der kommunistischen Partei". Few works have ever had such an enormous influence on the course of world history. A Georgian-language edition had appeared at Tiflis in 1905, but in the wake of the Menshevik Revolution of February 1917 the mostly Russian soldiers in Tiflis favoured Lenin's Bolsheviks over the ruling Mensheviks. The present Russian edition no doubt served to stoke support for the Bolsheviks in Tiflis, either leading up to or directly in the wake of Lenin's Russian Revolution of October 1917: it was published by the Bolshevik newspaper "Kavkazskii Rabochii" (the Caucasian worker), which began publication in March 1917, ceased in December 1917 and whose printing press was destroyed in February 1918. Although the Bolsheviks failed to gain control of Georgia at this time, the importance of Georgia in revolutionary Russia is symbolized by a Georgian Bolshevik who would have been 38 and living in Tiflis when this translation was published, Joseph Stalin.

The order of the words in the title differs from most earlier editions, matching that of the 1906 Saint Petersburg and 1917 Vladivostok editions, no doubt reflecting the new wording that Marx and Engels themselves had introduced with their definitive German edition of 1872. The present edition includes Russian translations of their new preface from that edition, as well as Engels's prefaces to the 1883 and 1890 editions. It ends with the famous words: "soglasheniem rabochih partchii vseh stran" (Workers of the world, unite!).

This edition collates: [A]18 = 18 ff., and is printed on machine-made wove paper. Slightly browned, with a waterstain around the fold of the wrappers. which caused the red to bleed onto the gutter margin of the first and last page of the text, and with the staple very slightly corroded, discolouring the paper around it, but otherwise in very good condition. Unique first edition of the Russian-language Communist Manifesto to be published in Georgia. 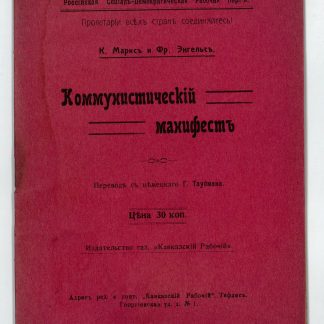