Second, revised edition with a new preface (first published the previous year). Thornton (1813-80), a writer on political economics, was an intimate friend of John Stuart Mill. "[I]n 1869 [he issued an] economical treatise, entitled 'On Labour...'. A second edition appeared next year, containing some new matter. The work was sympathetically reviewed by Mill in two papers in the 'Fortnightly Review', which were republished in vol. IV of his 'Dissertations and Discussions'; but the chapter on the origin of trade unions was treated by Brentano in his essay 'On Gilds and Trades Unions' as unhistorical. In a supplementary chapter appended to the second edition Thornton described co-operation as 'destined to beget, at however remote a date, a healthy socialism as superior to itself in all its best attributes as itself is to its parent', but added a warning that the period of gestation must not be violently shortened (On Labour, 2nd edit., p. 479). A German translation by Heinrich Schramm was published in 1870" (DNB). 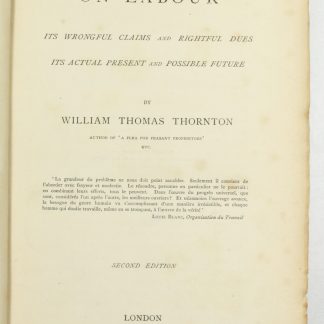