A large, wide-ranging collection of extremely rare, early Marxist, socialist, and anarchist publications, forming the private library of the Alsatian engineer and socialist Charles Keller, best known for beginning (though not completing) the first French translation of Marx's "Kapital". Indeed, the collection includes Keller's personal copy of the 1867 German first edition, with his characteristic red and blue pencil markings and occasional translator's annotations in the margins. His library is rich in works on the International Workingmen's Association (the "First International"), of whose Paris section Keller was a member; he participated as a delegate in the Second Congress of the League of Peace and Freedom at Berne. Keller's library includes a considerable number of excessively rare socialist pamphlets from the 1840s to 1870s (some inscribed to him), spanning the periods of the Second Republic and the Second Empire. They include many works of utopian socialism, Fourierism, and Proudhonism, but also anarchist works and the first published account of Devil's Island. In 1871, Keller was a member of the Paris Commune, the writings of which constitute another important focus of his collection. After being injured fighting on the barricades, he escaped to Basel. Keller had been an early associate of Elie Reclus and Mikhail Bakunin, and it is little surprise that when the conflict between anarchist and Marxist factions in the IWA came to a head after the fall of the Commune, ending in a schism between the two wings at the 1872 Hague Congress, it was the Bakunist, anti-Marxist faction with which Keller sided. This "anarchist" First International of St. Imier based itself in Jura, Switzerland, where Keller took exile, establishing himself as a writer of workers' songs. His song "Le droit du travailleur" (also known as "La Alsacienne" or "La Jurassienne"), published in 1874, became highly popular with its forceful refrain: "Ouvrier, prends la machine, / Prends la terre, paysan!" (Nettlau, p. 61). Keller eventually returned to France after the amnesty of 1880, settling in Nancy, where he continued his work as a songwriter and poet under the pseudonym "Jacques Turbin". His ongoing interest in political radicalism and the social upheavals of the Third Republic is obvious from his library's numerous anarchist and socialist publications from the 1890s and early 1900s, including several works on the Dreyfus affair. It may be telling of Keller's personal charm that in spite of his Bakunist apostasy he managed to remain on good terms with the Marx family (cf. J.-P. Lefebvre, "La première traduction française du Capital", in: La Pensée 233 [May/June 1983], pp. 85-99, at p. 87).

Most bindings rather rubbed with some chipping to wrappers, but well-preserved on the whole. Some items with Keller's signature on the cover or author's inscription; many with Keller's markings and annotations, providing a rare opportunity to glimpse authentic examples of what Bertolt Brecht famously termed "Questions of a Worker Who Reads". 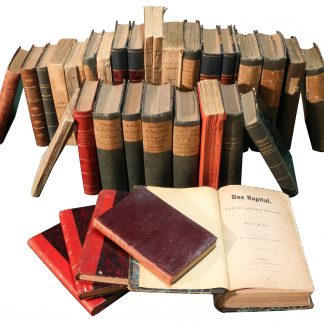