A fragment of Haydn's "Dice Benissimo"

A fragment of Haydn's "Dice Benissimo". Haydn composed two insertion arias for Antonio Salieri’s dramma giocoso of 1778, "La scuola de' gelosi": one is lost to us, while the present manuscript is a fragment of the aria created for the bass voice of the manservant Lumaca. One of Haydn's many responsibilities as Kapellmeister of the Esterházy family - by 1780 under Nikolaus I - was as director of the opera company, his patron's newest passion as of the mid-1770s. Esterháza Palace was transformed, at the behest of Prince Nikolaus, into an important fixture on the opera calendar, with its theatre routinely hosting multiple productions each year. Not only would Haydn direct and produce the performances, but he would compose his own works, as well as adapting those of other composers - usually choosing dramma giocoso - to suit the forces at his disposal. This often meant composing insertion arias - such as the present work - to suit the voice of a particular singer: around twenty such arias survive, dating from 1777 to 1789, although only a handful are written for bass or tenor.

Remnants of tape at upper, left-hand and bottom margins of recto. Provenance: Professor Theodor Dielitz (presentation and authentication inscription; Dielitz's substantial autograph collection was auctioned by Hartung in Berlin in January 1858), given to a Dr. Pribil as a duplicate, 1 January 1848. Last in the Metropolitan Opera Guild Collection. 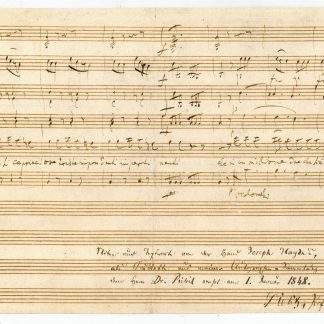