First edition, first issue: a very rare and influential landmark work re-issued in 1902 under the title "Garden Cities of To-Morrow", outlining the concept of the Garden City. Howard (1850-1928), a British nonconformist who in the United States had come under the influence of Emerson and Whitman, aimed to realize the ideas of Edward Bellamy's utopia "Looking Backward", building "'by private enterprise pervaded by public spirit an entirely new town, industrial, residential and agricultural'. This was the idea upon which he enlarged in the book published in 1898 and which he carried forward nine months later by the formation of a Garden City Association" (PMM). The Garden City addressed the over-population of urban centres caused by the industrial revolution, promising inhabitants all the amenities of urban environments with the benefits of rural life. It was first actualized in 1909 with the creation of the Letchworth Garden City and again in 1919 in Welwyn. Thus, Howard "lived to see not only the spread throughout the world of the movement he had started singlehandedly, but the establishment of Town and Country Planning as a universally recognized obligation of the government in the civilized world" (PMM). The seven chromolithographic plates include a depiction of the famous "Three Magnets" diagram, illustrating Howard's utopian view that the Town and Country magnets "must be made one".

Binding carefully refurbished with colouring to head and tail of spine, spine somewhat faded. Light spotting to first few leaves; 1928 newspaper obituary of Howard tipped onto front free endpaper. Provenance: from the library of the British socialist Archibald Gorrie (1885-1941) with his handwritten ownership on the title page. Gorrie was a founder-member of the Leicester Branch of the Socialist League, which he served as secretary. 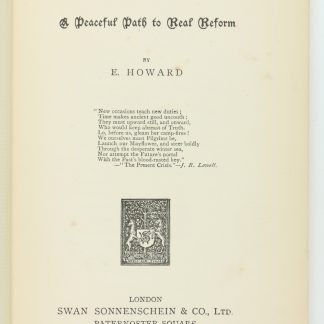