"An Innocent Arab Proposing the Destiny of the Universe"

Rare second, expurged edition of this remarkable treatise offering predictions for the destiny of European nations, issued without place or printer in the year of the almost unobtainable first edition, most copies of which were burned by the hangman at Nantes and Rennes shortly after publication. The first edition was deemed offensive due to the predictions of five volvelles in the second section which offered horoscopes for Islam, Christianity, France, Spain, and England. A "Figura Sectae Mahometanae" dared to give a horoscope of the Prophet Mohammed and a list of significant events in the history of Islam; this was followed by predictions which included the suggestion that a quarter of the world would be Islamic by 1703. The horoscope of Christianity also included dire predictions: indeed, those for the fate of England (ending with the wiping out of the English nation in 1884) caused a serious diplomatic rift, resulting in the English ambassador demanding the book be suppressed. The present edition of the "Astrologiae Nova Methodus" (and subsequent ones) omits the incriminated 7 pages and 5 volvelles; instead, it prefixes a new, two-page introduction entitled "Principiorum Astrologiae Brevis Expositio" ("The Principles of Astrology, Set Out in Brief"), which explains one of the movable discs in detail.

The book's authorship remains a mystery. It is attributed on the title-page to a certain Francisco Allaeio, "Christian Arab", but this is probably a pseudonym for Yves de Paris, a Capuchin monk known for his anti-establishment views. The third section of the work offers a religious justification for the relevance of astrological prediction, in which the author defends himself as an "innocent Arab proposing the destiny of the universe" (p. 5).

Endpapers not pasted to covers; some browning, fingerstaining and edge defects, but still a good, wide-margined copy. A 13-page typewritten German translation of the preliminary matter ("The Fate of the Author" and "The Principles of Astrology"), apparently the work of a German scholar of the 1930s with an attractive hand-drawn title page in red, yellow and black ink, is inserted at the end. 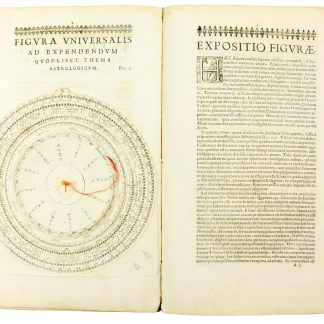