4to. (148) pp. With a small floral vignette on the title-page and two woodcut initials. 18th century full vellum with gilt title label on spine.

First edition under this title, and the definitive edition of the Renaissance. Al-Hasan is "often quoted in astrological works of the Christian middle ages under the name Albubather. He flourished about the middle of the third century A.H., for Ahmad b. Abi Tahir Taifur (died 280 = 893) mentions him in his Kitab Baghdad as a contemporary" (Suter). Notable is the scholar-printer responsible for the work: Johannes Petraeus was soon to cement his historical reputation by printing Copernicus's "De Revolutionibus" (1543). In the present work, Petraeus offers his own justification for printing the work of Al-Hasan alongside such luminaries, for "true majestic Astronomy is on a higher level than the things intelligible to students. However this should not dissuade them from its handmaiden, Astrology, as its fruits and rewards are adjudged to be pure, and itself offering many advantages" (preface to the reader). Astronomy was properly regarded as being essential for deriving accurate figures needed for the sciences of Astrology and Prognostication; a heavily annotated copy of this edition of Al-Hasan is known from Tycho Brahe’s library (cf. Prandtl, Die Bibliothek des Tycho Brahe), and Robert Westman has argued that Copernicus not only embraced astrology but sought to defend it in his "De Revolutionibus" ("Copernicus and the Astrologers", Dibner Library Lecture, 2013).

The important 9th century astrologer and physician Abu Bakr al-Hasan is best known for this work on casting nativities, or divination as to the destinies of newborns, which was "translated by Salio of Padua in or around 1218. The work is extant in a least seven manuscripts and four early printed editions from 1492 to 1540. A treatise in 206 chapters on nativities (birth horoscopes) providing answers to a wide number of questions pertaining to the twelve houses" (The Warburg Institute, Bibliotheca Astrologica Latina). The questions range from correct aspects of insemination and conception to the effects of delayed birth; the effects of the moon and planets on the pregnancy; the feeding of the newborn; and even whether the birth will take place "modestly" or "immodestly". According to Al-Hasan, if Mars and Mercury align, the newborn will unfortunately be a liar; he also gives guidelines for how to determine whether the offspring will be pious; whether they will be a "hypocrite"; intelligent; gifted with a keen memory; foolish; faithful; generous; greedy; jealous; beautiful; argumentative; a fornicator; a thief; a sodomist (chapters 37 & 38); and prone to chastity or prone to sins against nature.

OCLC shows one copy in US libraries, at Brown. 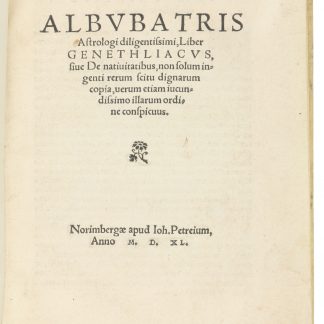