First edition. Campomanes (1723-1802) was a distinguished Spanish statesman, jurist and economist who greatly contributed to the improvement of Spanish commerce and industry, the promotion of agriculture, the reform of the system of taxation and the diffusion of popular education. His theoretic views and practical efforts strikingly resemble those of his illustrious contemporary Turgot. Schumpeter notes that in view of the date of publication, Campomanes had little if anything to learn from Adam Smith. The present volume deals not only with the education of the Spanish working class, including chapters on apprenticeship, examinations and female labour, but also discusses guilds, provisions and funds for the disabled and aged, etc. It also boasts a chapter on Spanish foreign trade, particularly with the West Indies, which was overlooked by Sabin. The present work is significantly rarer than the author's better-known "Discurso sobre el fomento de la industria popular", published the previous year.

Faint dampstaining to lower margin of first and last leaves, but a fine copy. 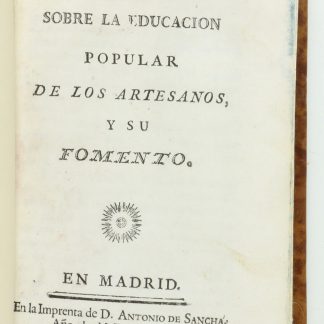