First edition of an early and rare work on population dynamics. The author investigates the development of the population of France, arguing that it should be increased.

Nothing appears known about the chevalier de Cerfvol other than that he was a lawyer; Spengler groups him with the "repopulationists". Cerfvol holds that the population of France had declined from 24 millions in the 16th century to 18.7 millions in 1700, and that since then the population had declined again by about half. Though his figures seem doubtful, his calculations are worth noting because they represent "the first draft of what nowadays is called the net rate of reproduction". The main cause of the depopulation of France, according to Cerfvol, is the indissolubility of marriage, and all other causes are merely derived from this: celibacy, profiglacy, the infertility of so many marriages because of physical impotence or incompatibility of characters, etc. Hence, Cerfvol considers the legalization of divorce as the best remedy against depopulation. In addition, he suggests that the state facilitate the marriage of soldiers, including support for their families and provisions for widows and orphans, which also would induce foreigners to join the army. According to Sauvy, the book was seized and burnt, but the type-setting preserved and used for a new edition published in Geneva in 1770 under the title "De l'utilite civile et politique du divorce".

Neat repair to one leaf. A fine copy with ample margins. 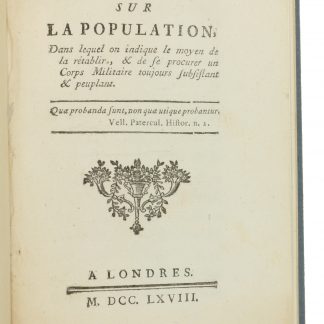