Early, uncommonly extensive album of photographs of Constantinople (including some of Athens and Crimea), most signed by the photographer, James Robertson, created during his stay in Istanbul between 1853 and 1857. Of the 21 photographs present, no fewer than 14 show Constantinople and Scutari: they include a magnificent panorama of the city and across the Golden Horn, seen from Camp Daoud Pasha, sweeping views of the Sultan Ahmed Mosque, the Hagia Sophia and other mosques, the ancient hippodrome with its obelisks, views of the Seraglio, Nusretiye Mosque and Tophane Square, the Fountain of Ahmed III, Süleymaniye Mosque, street scenes, etc. Comparable albums with Constantinople photographs by Robertson are located at the Bibliothèque nationale de France (including the magnificent four-volume album of the Comte de Paris), the Getty Research Institute, Harvard (12 photographs, of which only a few show Constantinople), and other institutions with loose prints such as Princeton (four photographs, one of Constantinople) and the State Library of Victoria (31 photos, of which only four are of Constantinople). In all this is one of the strongest albums known with Constantinople content. The five photographs of Athens include a view of the Acropolis, the Tower of the Winds, the Erechtheion, the Parthenon, and the Temple of Hephaestus (Theseion); the latter two photographs are also in the large Robertson album at the Getty. Two final images show Sevastopol in Crimea (the docks and a large, cloth-backed panorama). Each image is accompanied on the opposite leaf by a handwritten French caption of the place recorded.

Far too little is known about the pioneering Scottish photographer James Robertson (1813-88), who moved at an early date to Constantinople to take the position of Chief Engraver for the Royal Mint, as part of the modernization of the country. He was related by marriage to the younger Felice Beato, a pioneer of 19th century photography, with whom he later opened a studio and recorded the Crimean war, the earliest conflict to be thus recorded. It is possible that the Beato brothers - Felice and Antonio - learnt their craft from Robertson; this album, however, pre-dates that partnership, as the photographs are signed by Robertson only. From 1853 onwards, a collection of Robertson's photographs was published with the title "Photographic Views of Constantinople" (by Joseph Cundall at the Photographic Union). 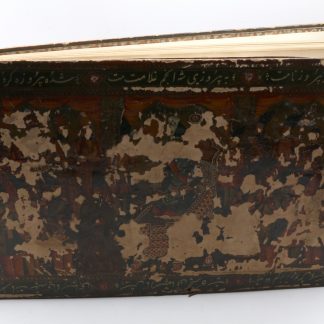