To his friend Collet, signed in full

Unpublished letter to the Chartist and radical freethinker Collet Dobson Collet (1812-98), in English: "My dear Sir, On my return from the seaside I found your letter d.d. 23 September. You will much oblige me by being so kind as to forward me some of the copies of the 'Revelations', as I have none left. Yours very truly [...]".

In very good condition, with intersecting folds, moderate wrinkling and a few creases; the sheet is bright, the writing dark, precise, and easily legible in spite of Marx's distinctively minute hand.

Marx was a close friend of the Collet family, which included the pioneering feminist activist Sophia Dobson Collet, social reformer Clara Collet, and the recipient of this letter, the editor of "The Free Press: A Diplomatic Review", to which Marx contributed a number of articles. The men became good friends and soon held weekly meetings at each other's houses to recite Shakespeare. The assembled group, which was formally coined as the Dogberry Club, included Marx's daughter Eleanor and Collet's daughter Clara, as well as Edward Rose, Dollie Radford, Sir Henry Juta, and Friedrich Engels. The publication to which Marx alludes, "Revelations of the Diplomatic History of the 18th Century", was originally serialized in the "Free Press" from August 1856 to April 1857. 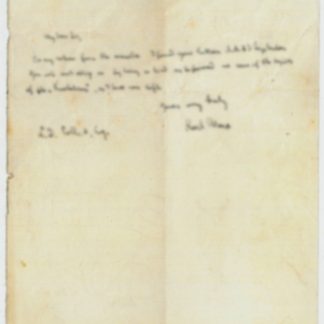