Fifty imaginary island cities, drawn for the Doge of Venice

Unique album with splendid manuscript designs for imaginary fortified cities, created for and dedicated to Marino Grimani in the year of his appointment as Doge of the City and Republic of Venice, which he would reign over until his death. Grimani served as Superintendent of Fortresses before becoming Doge and worked for many years on the design and construction of the Palmanova fortress, the greatest of the Renaissance star forts and constantly embattled by the Ottomans as well as by other forces for centuries to come. Vericci's album constitutes a paragon of Renaissance idealism: a utopian vision which champions the might derived from pushing human genius to the limits of the imagination, combining mathematics, philosophy, and military prowess with art, poetry, and design. Little is known about the author-artist Marco Vericci, some of whose other ingenious military designs survive in the Biblioteca Bertoliana in Vicenza, but he may have worked with Grimani on the designs for Palmanova. Italian art historian Lionello Puppi has cautiously suggested that "Vericcius" may be a pseudonym of Fillipo Pigafetta, a Venetian soldier and mathematician who wrote extensively on military fortifications. In this album, Vericci illustrates and whimsically describes fifty imaginary cities whose designs are based on the utopian mathematical ideals of the Renaissance star fort. The cities, with names like "Mirabella", "Grimanopoli", and "Durissima", are situated in elaborate landscapes (almost all are island fortresses, like their model) and are rendered in exquisite detail. The octave opposite each illustration describes the strengths and virtues of each fantastical fortress in the vein of Italo Calvino's novel "Invisible Cities" - which also featured a litany of imaginary towns all reflective of La Serenissima herself. The last illustration but one depicts the 1571 Battle of Lepanto, a major naval victory by the Holy League over the Ottomans. The Palmanova fortress was dedicated exactly 22 years, to the day, after the battle - thus its inclusion here links the glory of Lepanto explicitly to the achievements of Doge Grimani, in addition to re-situating this imaginative work in its real-life context of simmering conflict not just between Europe and the Turks, but also between Venice and Austria - her enemy to the North.

Some light soiling and spotting; some early marginal repairs where ink has corroded the paper; traces of paste on first two leaves with loss to a few letters. Otherwise in excellent state of preservation and still in its richly gilt morocco binding commissioned for the Doge of Venice (his arms in the centre of the back cover rubbed). 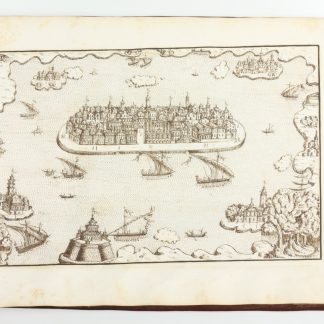