Small folio (215 x 285 mm). Arabic and Ottoman Turkish manuscript on paper, 246 ff. 21 lines of black naskh per page (text area 23 x 13 cm), with section titles in red; fol. 1r with an elaborately calligraphed title in black and red, ff. 1v-2r with red, green and gilt frames; ff. 2v-3r with an illuminated world map and fol. 27r with a coloured, marginal illustration of a nilometer in cross-section, and f. 51v with a diagram of the Ka'aba in red and black. 19th century drab linen over contemporary blind-stamped leather with fore-edge flap; manuscript Arabic title to lower edge. Pink-dyed European endpapers watermarked with a six-point star and the letters AF.

An unusually large and attractive copy of the 15th-century cosmographical compilation most often ascribed to Siraj al-Din 'Umar ibn al-Wardi. His authorship and the manner of the text's composition remain a subject of scholarly research, but it was a popular text in the Ottoman world, much copied, and translated into Turkish repeatedly. Its popularity has led to a tangled series of recensions, with different copies incorporating various different elements from the text. While some copies omit the historical and eschatological sections, ours contains all the expected sections. The text notes the world, its regions, seas, cities, rivers, and mountains. Plants and animals are also described and their various properties enumerated. The final, brief sections provide a set of capsule histories and, lastly, a description of the sayings and deeds of the Prophet and his companion. The title and preface of the present copy are in Arabic; the rest of text is an anonymous Turkish translation. Though al-Wardi's cosmography circulated in Arabic and numerous Turkish translations, this hybrid Arabic-Turkish recension is relatively unusual. The scheme of illustrations is conventional in the world map and diagram of Ka'aba, often found in copies of this work with slight variations, but less so in the cross-section of a nilometer on fol. 27r, an illustration we have not seen in other manuscripts of this text. The nilometer is not located or named in the text, but appears beside the section on Fustat, and may be the Abbasid nilometer constructed opposite Fustat in 861. The geometrically rigid map, commonly known as "Ibn-al-Wardi map", renders schematically the mediaeval Islamic image of the world: "At the center of the map are the two holiest cities of Islam, Mecca and Medina. The map shows China and India in the north and the 'Christian sects and the states of Byzantium' in the south. The outer circles represent the seas" (Cat. "World treasures of the Library of Congress: Beginnings" [2002]).

Binding somewhat worn but professionally repaired, providing ample evidence of an expensive, luxuriously produced copy in the traces of the original decoration still visible beneath the later cloth; the vividly dyed endpapers suggest an unusual taste for colour on the part of the patron who first commissioned this manuscript. Internally, a little staining to the initial folios, and a small dampstain to the gutter, otherwise clean. Ownership inscription of Mustafa, an artillery officer, dated 1067 AH (1676/7 CE). 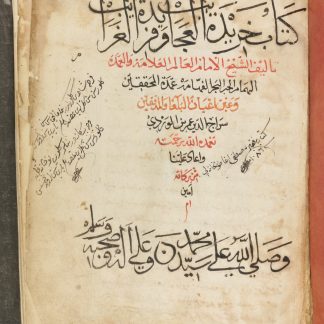