With sketch maps of the Gulf

22 typewritten sheets (4to) in carbon duplicates, revised by hand, with two smaller hand-drawn coloured maps of the Arabian Gulf, showing Bahrain and Qatar with the "Pirate Coast".

A closely typed report on Bahrain, written in the autumn of 1936, outlining the country's history, situation, population, government, economy, foreign relationships and influences. This is accompanied by two detailed coloured sketch maps of the Gulf, showing Bahrain off the coast of Qatar and the entire Gulf from Kuwait to Oman, with the British and American spheres of interest and the international air routes marked.

During the two years that followed the end of the Great War, the British held control of most of Ottoman Mesopotamia (now Iraq) and the southern part of Ottoman Syria (Palestine and Transjordan), while the French controlled the rest of Syria, Lebanon, and other portions of southeastern Turkey. In the early 1920s, British and French control of these territories became formalized by the League of Nations' mandate system, and in 1923 France was assigned the League of Nations mandate of Syria. It would last until 1943, when Syria and Lebanon emerged as independent countries. 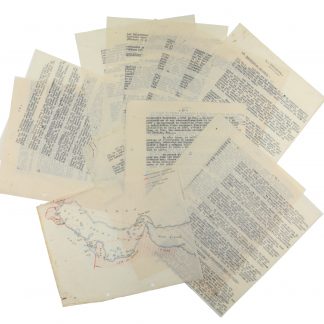