Rayon pilot's map of the Arabian Gulf region focusing on the Trucial States (modern United Arab Emirates), Qatar, Bahrain, Oman, Iran and Saudi Arabia, including the main oil installations. Items of specific interest to aircraft, such as airfields and even seaplane bases, are particularly listed. Warnings to stay within the specific flying routes while in Iran are placed on multiple locations. While the map depicts a continuous area on both sides of one sheet, it actually consists of two maps, originally published separately. We here include two copies so the whole area can be displayed at once. The maps are reproduced after the third and fourth edition. 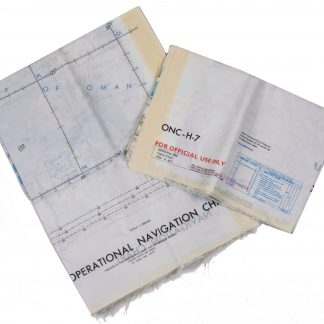