The complete research library of the late Professor Dr. Manfred Hahn, who held the chair of the History of Bourgeois Society and Political Theory at the University of Bremen from the University's founding in 1971 to his death 42 years later. A body of nearly 3000 individual scholarly works, often in multi-volume sets: the unsurpassable basis for any research in the field of early Socialism, Marxism, and Communism.

It was Hahn's achievement to develop the study of Pre-Marxist Socialism as a field of research in its own right. Hahn, born in Leipzig in 1938, was educated at the Universities of Freiburg and Münster, where he pursued a doctoral programme in philosophy, history, and constitutional law. His supervisor was Joachim Ritter, possibly the most influential of West German conservative post-war philosophers, and he also enjoyed the tutelage of Ritter’s similarly eminent disciples Odo Marquard and Hermann Lübbe. Trained in their rigorous thinking and radically independent scepticism rather than in their politics, Hahn in 1971 became the first Professor of the History of Bourgeois Society and Political Theory at the newly-founded University of Bremen, then considered a hotbed of leftism. Hahn pioneered the study of Early Socialism, or, as he preferred to call it, Socialism before Marx, examining alternatives to bourgeois, capitalist society throughout history and investigating practical attempts to establish socialist communities. Hahn was known as a meticulous scholar with a complete command of his sources. Much too fastidious to publish prolifically, he produced not only thorough and exhausting methodological studies, but also groundbreaking guides to the critical study of pre-Marxist sources and archival material. Professor Hahn was honoured with a Festschrift in 2004; he passed away in Worpswede in 2013.

A complete list of titles contained in the library is available upon request. 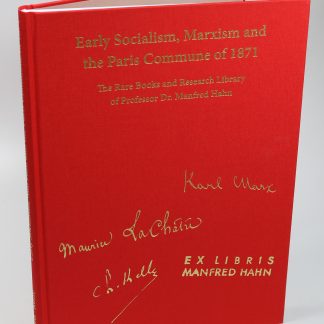