The Last Will and Testament of Louis XVI in Arabic

First Arabic edition. "Silvestre de Sacy translated the Last Will and Testament of Louis XVI into Arabic and had the translation printed together with the French original in 1820, in hopes that it might prove a comfort and encouragement to the Christians of the Orient, while giving Muslim readers a demonstration of Christian submission and evangelical meekness" (cf. Fück). Three years previously, de Sacy had published the late King's Testament (together with the last letter of Marie Antoinette) in a luxurious folio edition. "Sacy never let his Christian convictions hamper his work as a scholar, for he saw religion as a personal matter. Although he revealed his faith at times, it was never to pose it as the strongest model against which to judge other religions. He was nevertheless very pious. There is no other way to explain his translation of the guillotined king, Louis XVI, into Arabic [...]. He apparently wished to show how devout, simple and charitable his beloved monarch had been" (Kamal as-Salibi, The Druze [London 2005], p. 20).

The orientalist de Sacy, a monumental figure in the development of oriental studies in France, began his career as professor of Arabic at the École des Langues Orientales Vivantes in 1796. In 1806 he was offered the chair of Persian at the College of France and in 1824 was appointed director of the school of oriental languages. He also acted as advisor to the Ministry of Foreign Affairs, translating political propaganda into Arabic, including the "Bulletins of the Grande Armée" (cf. Atabey 1134). 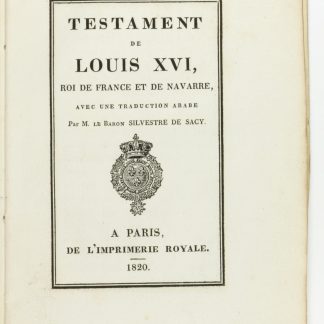