[Confidential British Government Memoranda on the Trucial Coast]. Memorandum of information received during the month of January [-December] 1911, regarding affairs in Arabia, the North-East Frontier and Burma.

A full year's worth of confidential memoranda issued by Edward Henry Scamander Clarke (1856-1947), Deputy Secretary to the Government of India, providing a detailed picture of British relations in Arabia and Asia throughout 1911. The memoranda encompass Arabia (including Aden, Baghdad, Kuwait, Muscat, Bahrain, the Gulf, and the Trucial Coast), Tibet, Bhutan, Assam, and Burma. The numerous and frequently extensive paragraphs dedicated to the "Arabian littoral of the Persian Gulf" not only discuss problems of charting and navigating the coastal waters, but also focus on defending British commercial interests in the region at a moment when the international trade was scrambling to access the Arabian pearl banks, while at the same time British authority was taking a dramatic plunge in the aftermath of the notorious "Dubai Incident" of 24 December 1910, a botched gun raid operation that led to rising tensions between Britain and the people of the Trucial Coast. Items include notes on the desire of the "Wahabi Amir of Nejd", Abdulaziz ibn Saud, to "come into closer relations with His Majesty's Government"; proposed hydrographical surveys of possible approaches to Kuwait and Bahrain; a proposed enquiry into the causes of the depletion of the pearl banks in the Gulf, and the possible attitude of the local Arab tribes as well as foreign agents in the area; an investigation into possible business residences of Rosenthal Frères in Dubai and Bahrain, and the question of British firms entering into the local pearling business; a proposal to secure written assurances from the Sheikhs of the Gulf not to extend pearl fishing concessions to foreigners; policy differences between Britain and the ruler of Dubai, Sheikh Butti bin Suhail Al Maktoum; piracy committed on a Dubai boat; the proposed establishment of British banks at certain port town along the Gulf coast; a discussion of the need for a treaty with the Qatar Sheikhs; the "question of the sovereignty over Katar"; the cancellation by the Sheikh of Sharjah of an excavation concession granted on Abu Musa island; the replacement of lost light buoys off the Arabian Gulf coast; negotiations with Turkey over territorial differences; Kuwait and the Baghdad Railway; and the Ottoman occupation of Jazirat az Zakhnuniyah (off the Saudi Arabian coast, between Bahrain and Qatar).

Further sections discuss treaties and trade agreements; expeditions and scientific missions; irrigation, shipping and railways, telegraph and postal networks, trade; arms trafficking; disturbances and risings; and British relations with Turkey and China. Also covered are the murder of Noel Williamson, assistant political officer, Sadiya, and his party in the Panga Hills, Assam, and the subsequent Abor Expedition; the Chinese Revolution of 1911 (Xinhai Revolution) and its impact in Tibet and Burma; and the Italo-Turkish War. 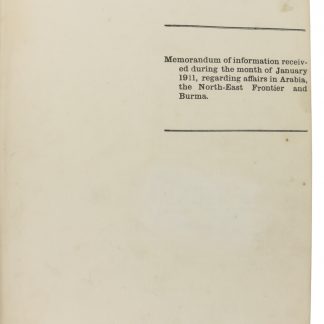