Early edition of this Latin translation of a treatise dealing with the preparation of pharmaceutical drugs. It is book 28 from the Al-Tasrif, a 30-volume Arabic encyclopaedia on medicine and surgery, written ca. 1000 AD by the Arab physician Abulcasis, the father of surgery. The present translation was first published in 1471 and was for the present edition published together with treatises by Nicolaus Salernitanus and Mesue, not included here.

"Al-Zahrawi was not only one of the greatest surgeons of medieval Islam, but a great educator and psychiatrist as well. He devoted a substantial section in the Tasrif to child education and behaviour, table etiquette, school curriculum, and academic specialisation. He encouraged the study of medicine by intelligent and gifted students after completion of their primary education in language, religion, grammar, poetry, mathematics, astronomy, logic, and philosophy" (DSB).

Four leaves misbound, some minor thumbing, one leaf with two restored marginal tears and a stain on the last leaf (also affecting the previous three leaves), but otherwise in good condition. 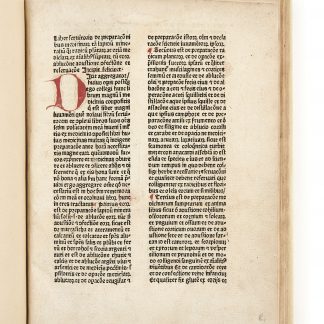