The first authoritative work of antiquity on the 'materia medica', the branch of science treating remedial substances, based on the author's first-hand research throughout the Middle East. This is the rare first printing of this edition with the commentary by G. B. Egnatio: the third Latin (altogether the fourth) edition of Dioscorides, the first to contain the translation of Ermolao Barbaro. The appendix contains the first edition ever of "Corollarii", Barbaro's conclusions, sometimes considered a separate work by bibliographers.

"Dioscorides' work is the authoritative source on the materia medica of antiquity. He described over 600 plants and plant principles" (Garrison/M.). "Very little is known about its author [...], except that he was a Cilician Greek who lived in the time of Claudius and Nero, and that he travelled widely in the Middle East, probably as a physician in the Roman army [...] It is no exaggeration to say that from its publication until well into the 17th century [...] all botanical studies were based on this book, and the greater part of any new botanical matter published during the 16th and 17th centuries was in the form of commentary on Dioscorides [...] It is only with the rise of modern scientific botany in the 18th century that his influence began to wane" (PMM).

Occasional light browning with more noticeable brownstaining to final leaves; a few wormholes (some within the text). A small paper flaw to the lower edge of the last few pages. 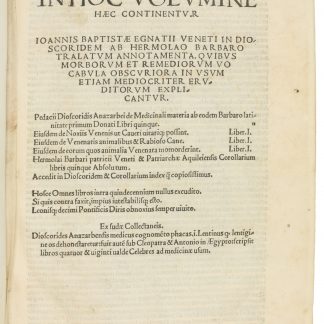