First edition of Ruel's translation of a foundational work on pharmacology

Folio. (12), 157, (2), (1 blank) ff. With the title within a decorative metal-cut (?) panel. Set in roman types. Contemporary limp sheepskin parchment; rebacked in calf, with new endpapers, but preserving the original paste-downs.

First edition of Jean Ruel's translation into Latin of Dioscorides's standard work on pharmacology, "De materia medica" (books 1-5), the most important botanical book up on to the 16th century, followed by four books on poison "De venenis" and "De venenatis animalibus" (books 6-9).

Dioscorides (ca. 40-90 AD), a Greek in the service of the Roman Empire, assembled all that was then known concerning the medicinal uses of plants, animals and minerals, adding information from his own experience accompanying the Roman army to Spain, the Middle East, North Africa and elsewhere, where he came to know many Persian, Indian and other exotic medicines. Though his work appeared in Latin from 1478 and in the original Greek from 1499, the present translation by Jean Ruel was first published here. "Often considered a herbal, [it] deals with all three natural kingdoms: plant, mineral and animal. It describes all the substances known to Dioscorides that were used as primary ingredients for medicines, and constitutes an encyclopedia on the topic. ... [It] contains just over one thousand chapters [each dealing with another medicine] and features 794 plants, 104 animals and 105 minerals. Most of the chapters contain the following information: the most common name of the drug and its possible synonyms; a description of the natural element producing the drug (for a vegetal drug, the whole plant); the part used as a drug, possibly with its preparation; the therapeutic properties of the drug; the diseases for which the drug was used, including the preparation and administration of the medicine; when appropriate, the falsifications and methods of authentication of the drug; and other uses of the drug, such as in cosmetics, veterinary medicine, of handicraft" (Glick).

"While Hippocratic and Galenic medical theory and practice were readily adopted by the physicians of the Islamic era-a system that has persisted down to our time in traditional and folk medicine throughout the Near and Middle East, it was the Ketâb al-haoaes (Book of the herbs), a translation of Dioscorides' famed treatise on materia medica by Estefan b. Basîl and his master the celebrated physician-translator Honayn b. Eshaq (b. 192/808 at Hira), that constituted the original source of knowledge and inspiration for medical and pharmacological writers … in the lands of Islam in the Middle Ages and afterwards. Dioscorides described approximately 600 plants, mainly of the Mediterranean area, providing for every item equivalent names in some other languages, its provenience, a short morphological description, and then a statement of its medicinal properties and uses. Dioscorides was held in great esteem by all the physicians and scholars in the Islamic period" (Encyclopaedia Iranica).

With embossed initials on leaf d5. Title-page slightly thumbed, a waterstain at the foot of the last few leaves, but otherwise internally in very good condition. Binding soiled. 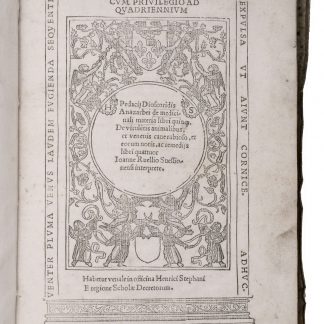