First edition of "the first actual dispensatory", with 271 numbered medicines

Folio (290 x 200 mm). (9), (1 blank), 31, (5) ff. With Du Bois's woodcut tree and 2 birds device at the end with motto, about 40 woodcut decorated initials (7 series?) plus about 100 repeats, and a vine-leaf ornament (Vervliet 44). Set in roman types with some preliminaries in an Aldine-style italic (with upright capitals) and occasional words in Greek. Recent parchment.

First edition, in the original Latin, of "the first actual dispensatory" (Schelenz), written in the Emperor Claudius's Rome in AD 47, prepared for publication by the French physician and botanist Jean Ruel (ca. 1474/79-1537). It describes the preparation and use of 271 drugs and other medicines (numbered i-cclxxi) and was a standard source for nearly all later dispensaries and pharmacopoeia far into the 17th century. It includes the first accurate description of the preparation of opium, the first known account of electro-shock therapy (using a torpedo fish, a kind of ray, as a source of electrical discharge to remedy headaches) and the therapeutic drinking of one's own blood.

The colophon notes that it was published by Simon Du Bois in October 1528 and the tree device at the end may allude to his name. But although the book has its own title-page and pagination, the main series of quire signatures begins with Aa, suggesting it was also intended for issue following another work. It was indeed also issued as a sort of appendix to Celsus, De re medica, Paris, Chrétien Wechel, 1529 (several of the references below record the present edition only with the Celsus). Although the Scribonius and Celsus name two different publishers, they share most of their typographic materials and clearly come from the same printing office, and the Wechel Celsus explicitly names Du Bois as printer in its preliminaries. Du Bois and Ruel had apparently studied together but Du Bois came under fire as a heretic and had to flee Paris in 1529, moving to Alençon. Curiously, Wechel's 1532 edition of Valturio Roberto, De re militari, has a tree and 2 birds device with the same iconography, style and motto as the present one: a straight-trunked tree with leaves in the upper third, a bird on a branch among the leaves just left of the trunk and another in flight lower down to the left, with more foliage around the base of the tree and a curled bandarole with the motto "unicum arbustum non alit duos erithacos" passing behind the middle of the trunk. Though the match is clearly deliberate, neither copies the details of the other and the other typographic materials also differ. A second edition of the Scribonius alone, without revision, appeared at Basel in 1529. Although the blank leaf 2*4 appears to be conjugate to 2*1 (2*4 is cancelled in Durling 910), Durling records a separate issue with an epistle on 2*4, with the same date as the colophon: October 1528.

With a couple long contemporary manuscript notes in brown ink. With some faint stains at the foot, reaching the text only in the first preliminary quire, and a couple very minor marginal defects, but otherwise in fine condition and with large margins (2-5.5 cm). Binding also fine. First edition (first issue) of a classic of pharmacology. 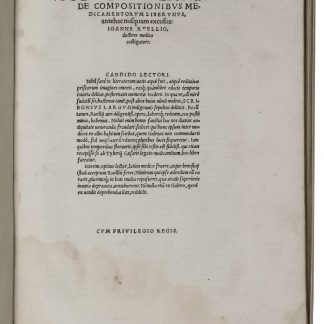