Almost unobtainably rare first edition of this digest of medical prescriptions, taken from the works of the highly-regarded Arabic physician Mesue the Younger (also known as Masawaih al-Mardini), including "a kind of general manual for apothecaries and perfumers" (Duveen). All recipes are in Italian, while the main title and the headings are in Latin. Bibliographers are not agreed on the book's place or date of publication: GW locates it merely in Italy, ca. 1495, whereas Copinger believes it was printed in Venice, by an unidentified printer, in or around 1500. The British Museum Short-Title Catalogue suggests Sigismund Mayr in Naples as the printer and 1510 as possible year of publication, while the British Library's catalogue now appears to prefer Venice and 1505 as tentative place and year. Klebs notes that the collection constitutes a "rifacimento" of the Italian edition of Mesue's "Opera medicinalia", published in Venice on 12 December 1493.

Contemporary ink ownership to title-page. A restored tear in the final leaf (not affecting the text), some brown specks on the title-page and an insignificant waterstain along the lower edge of the final gathering, but altogether in excellent condition. Rebound in a pretty half-calf binding around the turn of the century. Only two copies in libraries internationally (British Library and Univ. of Wisconsin, formerly the Duveen copy). That in the British Library is incomplete, lacking the final leaf (falsely described by Copinger as having a final blank leaf, which is in fact the endpaper). 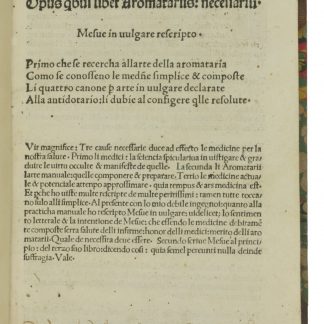