Editio princeps of the text of the "Shajare-i Türk", the principal historical work by Abu al-Ghazi Bahadur (1603-63), Khan of the Uzbek state of Khiva from 1643 until his death. The title is variously translated as "Genealogy of the Turks" and "Genealogy of the Tatars". The book was published in a French translation at Leiden as early as 1726, with additional translations appearing in the later 18th century. The first critical translation was published in Kazan in 1825; a Turkish version (by Vefik Ahmed Pasha) was published at Kazan in 1864. Edited by Jean Jacques Pierre Desmaisons (1807-73), oriental scholar and diplomat in Russian services. Desmaisons studied oriental languages at Kazan and St Petersburg and taught Persian and Arabic at Russian military academies before entering the diplomatic service and being posted to Tehran repeatedly in the 1840s. His present edition includes the text, annotations, and a French translation (the latter of which appeared shortly after his death).

A well-preserved, prettily bound set from the library of the Piedmont collector and self-taught Arabic linguist Luigi Cora (1871-1947) with his bookplate to pastedowns. 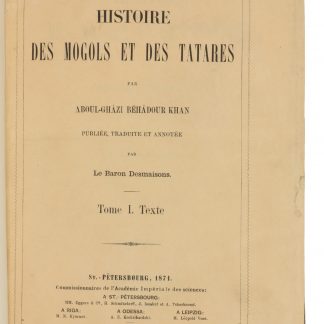