To an unidentified recipient, thanking for "Your volume [...] with its charming inscription": "[...] The Germans seem to me to be losing every trace of moral-self-respect in their methods; - Indeed, they have got to a point when it seems to me they hardly care to distinguish between right and wrong. But I may be prejudiced [...]".

On stationery with printed address; some damage to edges and remnants of scotch tape. 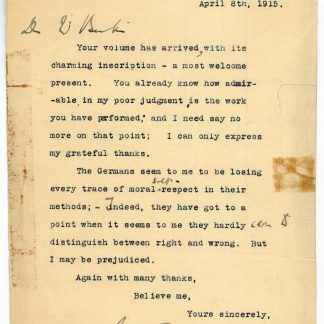