Rare, complete set of this finely illustrated history of Poland by the jurist and historian Bernard Zaydler (1799-1835), a member of the Polish Royal Society of the Friends of Science, in the 15 original livraisons as issued, instead of being bound (as is more common) as a two-volume set. The plates by the Italian engraver Antonio Verico and other artists show costumes and city views, mostly of squares and landmarks in and around the capital Warsaw, as well as historical and battle scenes, including the 1683 Siege of Vienna and the 1813 Battle of Leipzig. The portraits show the principal personages of Polish history, including Kings John III Sobieski and Casimir III the Great as well as the astronomer Nicolaus Copernicus. With two plans of Warsaw and Cracow as well as two folding maps of Eastern Europe in original hand colour, depicting the geographical situation of Poland prior to the first partition in 1772, as well as its 1831 state.

The 12 pages of preliminaries are bound at the end of volume 15. A small tear to p. 369f. of volume 5, not touching the text. Slightly foxed in places. Well preserved with a few minor flaws to the wrappers of a few volumes. Auction records do not list a single copy in the original 15 issues; 2-volume sets are rarely found to contain all 107 plates. 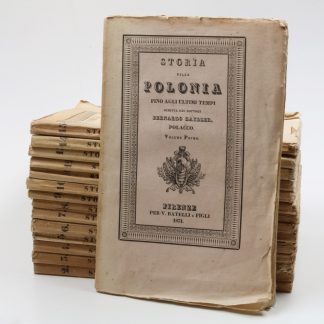