Owned and signed by Philip III of Hesse

Belluzzi worked as a field engineer for the Medici in Florence. He died during an attack on a Sienese fortress in 1554.

First six leaves damaged at upper corner with some loss of text, stained at head. With autograph ownership of Philip III, Landgrave of Hesse-Butzbach (1581-1643), at foot of title-page ("Philippus Hassice Landgravius"). Philip was interested in science and astronomy (he corresponded with Galileo and Kepler) and had an observatory as well as a fine library. Later in the Darmstadt court library (crowned monogram stamp on title-page; inscription "Bibl. Aul. Darmst. Rep. 7 Loc. 2" to inside front cover). Last in the collection of Thomas Fremantle, 3rd Baron Cottesloe (1862-1956), commander of the Territorial Army and president of the Society for Army History Research, with his index card ("acquired 1930") loosely inserted. 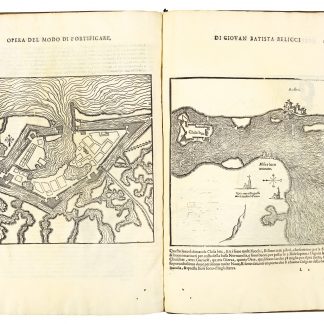