First and only edition, printed at the second printing press established in Istanbul. "A rare and very interesting work outlining the military reforms and the regulations for the New Troops established by Selim III in 1796/97" (Blackmer). The author, Mahmoud Ra'if, was a member of the reform movement instigated in Turkey by Sultan Selim III, who tried to change the traditional political structures of the Ottoman Empire and replace them with a political state that owed much to his youthful contact with Europe, and more particularly, the influence of the French Revolution. After his succession in 1789, Selim took steps to establish a new state under the Nizam-Jedid ("new order") regulations - from which the present work derives - underpinning his state with the formation of a new army and military infrastructure. Among the moves towards "Europeanisation" were the installation of printing presses at the military engineering school (where the present work, the first from the press in roman types, was printed), and the establishment of Ottoman embassies in the capitals of Europe, including London, where Mahmoud Ra'if served as secretary to the Ottoman Ambassador in the mid 1790s. As outsiders feared, the very reforms which are the subject of his work led to Selim's murder in 1808, while the author himself was "cut to pieces" by the enraged Janissaries whose elite position had been threatened. "The establishment of these troops - the Nizam-Jedid - and the jealousy which this aroused was one of the main factors leading to the revolt of the Janissaries in 1808 which cost Selim, and later the author of this work, their lives" (Blackmer).

Binding very slightly worn, interior clean and flawless throughout. Provenance: armorial bookplate of the Swedish diplomat Johan Henrik Tawast (1763-1841), who was seconded to Constantinople in 1812-13 to help negotiate the Russian-Turkish peace treaty of Bucharest; his autograph note "Scutari, 9 janvier 1813. 16 piastres, 20 pares" inscribed to front pastedown. Latterly in the collection of Thomas Fremantle, 3rd Baron Cottesloe (1862-1956), commander of the Territorial Army and president of the Society for Army History Research. 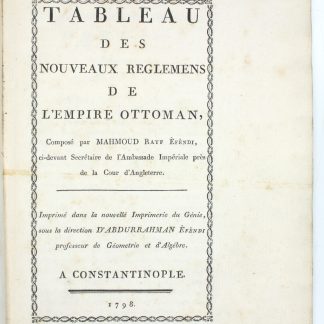