15th century manuscript letter from Syria, with a postscript by "Marco Polo"

An early 15th century letter from a Venetian merchant based at Homs, a strategic trade centre of the ancient China Silk Road, to his brother Donato Soranzo (Donatus Supantius) in Tripoli, followed by a post-scriptum message from Marco Polo, probably a descendant of the famous traveller.

Both the letter and post-scriptum concern goods to be shipped to Tripoli (and thence to Venice): "cotoni de Hama" (cotton from the namesake Syrian city), silk (also with arabesque patterns), and a specific pigment for cloth-dying, "lume di rocca," produced in the Syrian town of Edessa. An important terminus of the Ancient China Silk Road, Homs is the only natural gateway from the Mediterranean coast to the interior. Homs was the third Syrian station on the Silk Road, after Dura Europos and Palmyra. Homs was particularly well known for silk and wool weaving, especially the alaja, which was mottled muslin run through with gold threads and used in feminine apparel. This silk was exported as far as the Ottoman capital Istanbul.

The addressee, Donato Soranzo, was one of the Serenissima's most important merchants of his time. Established in 1400, the "fraterna Soranzo", an association between four brothers of whim he was the eldest, was heavily involved in the cotton trade between Venice and Syria. Their ledgers, preserved in Venice, are famous for being the earliest recorded instances of the double-entry bookkeeping system. The author of the letter calls Donato his "dear brother" and signs himself "Lorenzo, your kinsman". He was Lorenzo Soranzo, the youngest.

A Marco Polo, probably a great-nephew of the namesake traveller, is recorded among the Venetian merchants based in Hama, doing business with the Soranzos. He was probably Marco, son of Maffeo, son of Marcolino, of the San Giovanni Grisostomo branch of the Polo family - the last male heir, who died circa 1417.

A handful of scattered small holes affecting a few letters, traces of horizontal and vertical folds. Slight soiling to verso, minimal toning, otherwise in very good condition. A remarkable ephemeral witness to the commercial pre-eminence of Venice circa 1400, and its connection to the ongoing silk and textiles trade of the Ancient China Silk Road. 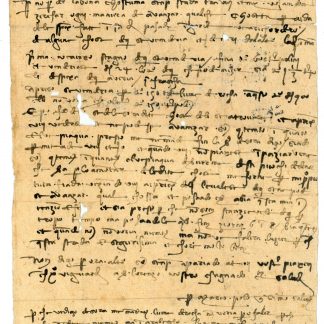