4to. 1 page. On stationery with printed address.

To the secretary of the Nordische Gesellschaft (Nordic Society) in Lübeck; a reply to an invitation to participate in the economic propaganda of the Nordische Gesellschaft whose purpose was to reinforce cultural and political cooperation between Germanic and Scandinavian countries. The Nordische Gesellschaft would become a central institution for Alfred Rosenberg, theorist and ideologue of the Nazi government. Heinrich Himmler was a member of the board of directors. "[...] I fear, however, that the benefits likely to ensue either to your Society or to me from the arrangement you suggest might be too slight for it to be worth our while to enter into a formal arrangement. My journalistic output is not now very considerable, and since virtually all of it is prepared for publication in 'The Nation', by no means all of it is of interest to European readers generally. Moreover, it would not in general be possible for me to let you have any article sufficiently long in advance of publication in this country for you to be able to arrange for its publication in daily newspapers in Europe until after it had already appeared here. Finally, I already have arrangements for publication of any articles which are suitable to the general European public in 'Wirtschaftsdienst', which, although it is a weekly, might interfere with circulation in daily newspapers in Germany, and also with the 'Neue Freie Presse' of Vienna [...]". 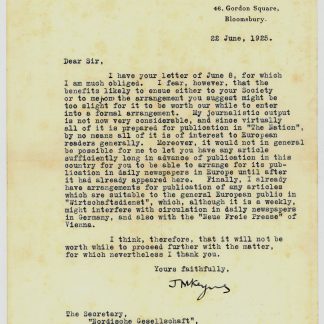