Rare Lebanese printing of the famous "Maqamat" ("Assemblies" or "Sessions") of al-Hariri of Basra (1054-1122): a virtuoso display of Arabic poetry, consisting of fifty anecdotes written in stylized prose which used to be memorized by scholars. "Al-Hariri's Maqamat tie in with the tradition of al-Hamadani. Like he, al-Hariri tells us of the experiences of an educated vagrant, Abu Zaid from Sarug. But his aim is not so much to render vividly this creature of his imagination or even his environment, but rather to invest his accounts with every syntactical and lexical finesse imaginable, and it is these, rather than the content of the narrative, that are to captivate and preoccupy the reader. This is the final flaring of the national Arab spirit: dazzling and, for the moment, pretty as fireworks, but similarly barren, ultimately fizzling out without effect" (Brockelmann). Hariri's masterpiece continued to captivate European Arabists since the 17th century (cf. Fück, 148).

Spine title reads "Fihris / pers.", misidentifying both the language and the title (copied from the pencil transliteration under the heading of the table of contents). A good copy from the library of Horst Wilfrid Brands (1992-98), professor of Turkish Studies and Islamic scholarship in Frankfurt am Main, with his ownership stamp to pastedowns. 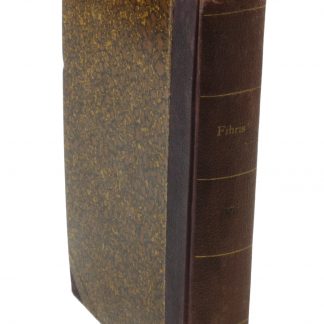