Tayler, William. Sketches Illustrating the Manners and Customs of the Indians and Anglo Indians.

First and only edition of an ethnographic study of native Indian people by William Tayler (1808-92), who was at the time Acting Salt Agent of the Central Division of Cuttack for the East India Company. He dedicated his work to "Lady William Bentinck" (born Lady Mary Acheson, 1809-50), who was the wife of the Governor-General of India. The illustrations were drawn by Tayler himself, who was an amateur artist and drew much of the Indian daily life that he encountered. He selected the present 6 drawings to be published and had them lithographed by J. Bouvier. The first 3 plates not only show the ways of Indian people, but even more so the luxurious life of the English in India. The first plate, "The Young Civilian's Toilet" shows a young man relaxing while being treated by several servants, who are named "Anglo-Indians". The room is strewn with objects of leisure. The next 2 plates, "The Young Ladies Toilet" & "The Breakfast" show equal scenes. The other 3 plates are more ethnographic in nature, showing native Indians in their everyday life: "Women grinding at the mill"; "the Sunyasees" (Sannyasis) & "The village barber". Tayler later became a controversial figure for his excessively harsh oppression of Indian people when he was the commissioner of Patna. 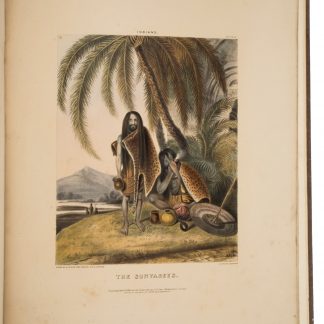 Sie sehen: Tayler, William. Sketches Illustrating the Manners and Customs of the Indians and Anglo …London, 1842. € 12.500,00
In den Warenkorb