Exceedingly rare first issue of the first map of Damascus published by the British Forces only a week after the Fall of Damascus. Drafted by the Royal Engineers from a "captured enemy map" and printed under the surveyors' supervision in the field, probably in Damascus, on a portable press carried by the Field Survey Company unit.

The ancient city of Damascus, one of the final prizes taken by the Entente Powers, was long a great cultural centre, the head of the Syrian Hajj Road, and more recently the northern terminus of the Hejaz Railway and the headquarters of the Ottoman-German forces in the Middle East. In the latter period of WWI, British forces met stiff resistance in Palestine, and it was only near the end of the conflict that they managed to break into Syria. British forces and their allies captured the Damascus on 1 October 1918. Lawrence of Arabia, who was part of the conquering force, was disappointed not to have been amongst the first Allied troops to enter the city, especially as he envisaged Damascus as the future capital of an independent and unified Arab state.

The British occupying force, commanded by Edmund Allenby, was suddenly in control of city of which they only possessed dated information. To ensure public order, to allocate military resources, and to deliver vital goods to civilians, the British command was in urgent need of an accurate, up-to-date map of Damascus.

All maps printed by Entente forces in the field in the Middle East during WWI are extreme rarities. The present map would have been issued in a only very small print run for the use of senior British officers, and printed on fragile paper in a large format, its survival rate would have been very low. We can trace only a single other example of the present first issue of the map, held by the British Library. The second issue, printed by the Survey of Egypt in 1919, is also extremely rare.

In very good condition, clean and bright, with just some minor creasing from having been rolled for many years. 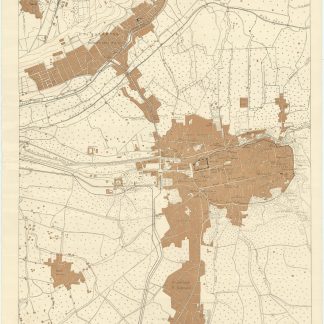