Extremely rare copy of the Arab Bureau's intelligence manual for the Arab Revolt: the important second, expanded edition, compiled by T. E. Lawrence's mentor, D. G. Hogarth, from multiple new sources which must have included Lawrence himself. The manual was graded "Secret" and "For Official Use Only", all copies to remain "the Property of H.B.M. Government". It includes descriptions of the geography, population, districts and towns of the Hejaz (with a section on the "large oasis village" of El-'Ala and its date plantations), notes on the local tribes, political information, colourfully written accounts of the personalities among the ruling family and beyond, notes on the Muslim pilgrimage, on trade and industries, communications, and travel routes.

Dated 26 February 1917, the book was issued by the Arab Bureau, established in Cairo the previous year under the auspices of the British Foreign Office to co-ordinate intelligence, propaganda and political activity in the Middle East during the Great War. It was based on information collected by the Admiralty War Staff, Intelligence Division, for the Admiralty's Arabia Handbook, supplemented by native sources. The first edition, written wholly by Hogarth and shorter by a full 30 pages, was rushed to the press in 1916. It was soon challenged for certain omissions (by St John Philby, among others), and the present preface admits that "the development of events [...] has improved our knowledge of many physical features, as well as altered the social conditions, of Hejaz. The first edition, therefore, which contained errors due to haste, has been recast by the hands responsible for its original appearance; and the second edition, now issued, is based, in considerably greater measure, on the evidence of persons who have actually visited the locality, and been in contact with its society".

Exceedingly scarce: JISC locates just four holdings (Durham, Edinburgh, the British Library, and the Imperial War Museum); OCLC adds just one more, the only copy to be found outside the UK - at the U.S. Army War College, Pennsylvania. A reprint appeared in 1978, and another a decade later within the Archive Editions series. The printing code on the verso of the final leaf suggests that 200 copies were printed, but the only example ever to have appeared at auction was Peter Hopkirk's copy of the 1916 first edition (Sotheby's 14 Oct 1998, lot 840).

Printed cover slightly stained, but preserved in its entirely original state; interior complete and fresh. A principal source of information, "of major historic value to students of the Arabian Peninsula" (note to the 1978 Falcon-Oleander Press reprint). 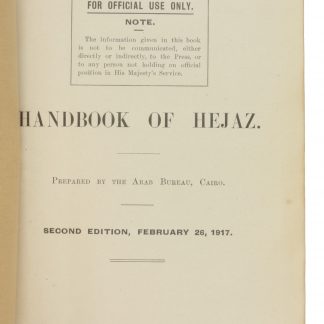